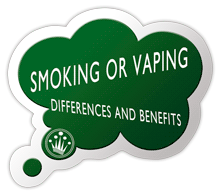 WHAT ARE THE DIFFERENCES BETWEEN SMOKING AND VAPING AN ELECTRONIC CIGARETTE?

The market for vaping devices is constantly evolving. With the entry of more modern devices in the market of electronic cigarettes, now, vaping devices offer greater air intakes, more effective drainage systems and much higher power that achieve a performance and sensations much higher than the first cigarettes electronic. You can use them by taking the puffs exactly like a traditional cigarette inhaling "to mouth" and you can also try to give more strong puffs aspiring directly to lung, the vapeadores find it much more satisfactory than vaping to "mouth".

DIFFERENCES BETWEEN SMOKING AND VAPPING AN ELECTRONIC CIGARETTE:

ADVANTAGES OF VAPING AGAINST SMOKING

Tobacco is the leading cause of avoidable death in the world.

According to the Ministry of Health, every year +500000 people die in the world due to the habit of smoking.

There is no known death so far attributed to vaping throughout the world.

n these two videos you can see the differences between smoking for a month 1 pack of cigarettes a day and vaping 120ml of liquid. Judge for yourself:

"An average smoker smokes a pack of cigarettes a day, I decided to do a simple experiment using cotton balls as lungs to determine what results from smoking a pack a day for 30 days, that's 600 cigarettes !! This is not a scientific proof, it is an analogy of what could happen and what could accumulate and what it could do to your mouth, throat and lungs, not to mention how it compromises every organ of your body by killing you slowly ... ... The effects of smoking in your body they are not a secret and if you did not know it until now, here is another reason why you should stop smoking.There are 100 years of data and deaths to demonstrate the devastation that smoking has on the body. Every year around the world for smoking It's never too late to quit smoking and once you see what a pack a day does for a month to your lungs and body, it will give you the encouragement you need to find will power and let Good luck on your trip to stop smoking. Remember, waiting for another day could be a day too late. "

"They vaped 120 ml of e-liquid, it took 3 days to vape all the liquid ... ... I used 2 identical vaping devices and 2 0.5 ohm resistors for the whole experiment. I used the same 2 resistances for the whole test, they worked perfectly and none of them burned out, the air vents in the vaping device were open to the maximum, scientists and experts agree that vaping is 95% less harmful than smoking An average user of vaping, inhales between 60 and 120 ml per month, while the average smoker smokes a pack a day, 30 packs per month."

The difference between the vaping video and the smoking video was amazing.

The condensation of water that accumulated in the dome during the 3 days of vaping is similar to the humidity of taking a shower.

Quitting smoking completely is the best option. The second best option is vaping.

My opinion after doing the 2 non-scientific experiments on smoking and vaping are ... No wonder so many people die from smoking

TIPS TO STOP SMOKING WITH THE ELECTRONIC CIGAR: 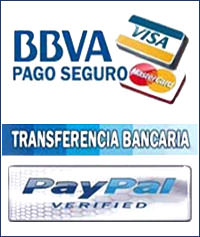 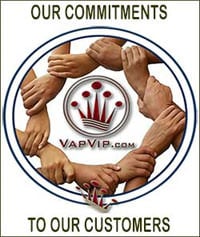 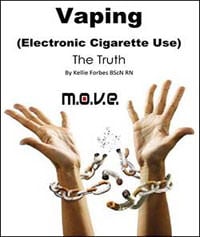