Notify me when available
Features

No reward points for this product.

Enjoy the best aroma of cream, coconut, chocolate and pecan nuts mixed in a masterful way.

The manufacturer recommends diluting it at 20%

Not suitable for vaping without mixing with a PG / VG base.

Concentrated aroma to be used mixed with a base of propylene glycol and / or Vegetable glycerin with or without nicotine.

It does not contain nicotine.

The flavor Don Juan Reserve of Kings Crest, is packed according to the European Norm, in bottles of PET of 10 ml.

Stored between 4 ° and 16 ° C, this concentrated aroma can be stored for at least 1 year in its original packaging.

Manufactured in France according to EEC Standards

Does not contain: sugar, gluten, genetically modified organism or diacetyl.

** Aroma Don Juan Reserve 100% concentrated Kings Crest not suitable for vaping directly without first mixing it with a PG / VG base.

Thank you. Your customer service is excellent. :-) 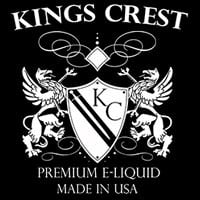 Quick view
Add to Wishlist
Out of stock

New
Quick view
Add to Wishlist
Out of stock

Quick view
Add to Wishlist
Out of stock